Mortgage Fraud is a very unpopular topic. It is simply not something anybody wants to talk about at all, let alone trace the corrosive effects of the dishonesty of our neighbors and fellow citizens on the fabric of the economy. However, it is not something that will go away. Indeed, the longer this fundamental problem is ignored or swept under the carpet, the more futile will all economic remedies be to alleviate the weakness and fragility of our financial system.

The magnitude of the problem – here is a link (.pdf) to the Eleventh Periodic Mortgage Fraud Case Report, addressed to the Mortgage Bankers Association. According to this document, losses for 2008 will be between 15 and 25 billion. Of course, readers have become inured to big numbers: a billion is now chump change, we need to talk in trillions when addressing the magnitude of our financial woes. That apparent imbalance will be addressed later in this article when discussing the multiplier effect of mortgage fraud. 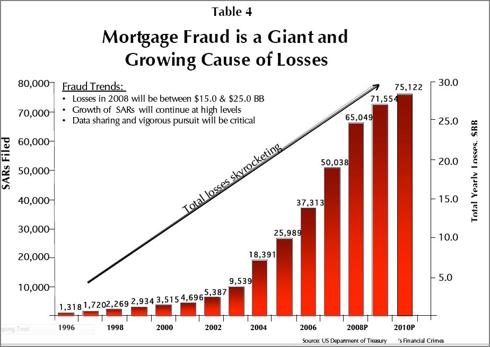 Insurance Company Evidence – Insurance against mortgage default has been issued in a number of different forms. Mortgage insurance companies, such as MGIC (MTG), Radian (RDN) and PMI (PMI) insure individual mortgages against default, and in addition have done bulk transactions. Financial Guarantors have written insurance, often in the form of CDS, on RMBS and CDOs containing RMBS.

As losses have accumulated, mortgage insurers have investigated the underlying transactions, finding fraud at a rate that I estimate at 15-20% of all insured mortgage loans. They rescind coverage when they find evidence of fraud.

Here is a slide from Radian’s Quarterly Presentation: 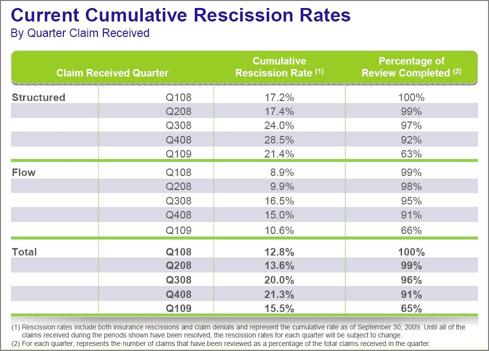 Structured Finance – not surprisingly, the worst of this material found its way into structured finance. Indeed, the apparent ability to pass the inevitable losses on to an endless stream of naïve investors has enabled this trend toward fraudulent transactions to continue far longer than it would have otherwise. MBIA (MBI) insured many of these transactions, and has been active in litigating against fraud. Here is an excerpt from a recent suit against Credit Suisse: 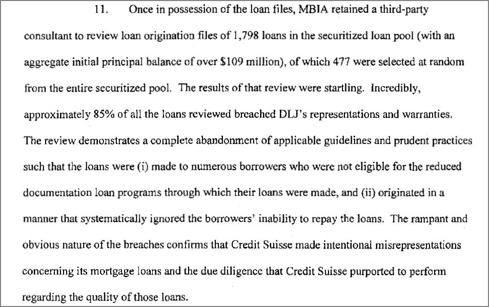 After reading a number of similar complaints, as well as listening to conference calls from MBIA and Ambac (ABK), I form the impression that about 25% of all underlying collateral in private label securitizations was created by fraudulent transactions.

Inadequate interest rates – interest rates around 5% are entirely inadequate to compensate for fraud at a rate somewhere between 15 and 25%. Efforts to restore the housing sector under these conditions are not going to be effective. They will simply compound the problem.

Multiplier Effect – Economists who advocate juicing the economy with fiscal stimulus frequently cite a multiplier effect: every dollar spent by government creates X dollars spent by the private sector. There is a similar multiplier for mortgage fraud: a dollar of mortgage fraud creates many times that amount of loss to the economy.

Property values would never have become so inflated if the spending power fueled by the ability to secure mortgages by fraud had not propelled them upwards. Nor would they have plunged so rapidly if the inevitable foreclosures had not glutted the market with distress sales.

Synthetic securities exacerbated the problem. Not content with creating toxic waste, the investment banks went on to duplicate it, as if by using a photocopy machine to create bogus bonds. Briefly, CDS referencing subprime RMBS were bundled together in synthetic CDOs. CDS are in point of fact insurance transactions, and should be regulated as such, with a requirement of insurable interest on the part of the buyer. Otherwise, problems arise with moral hazard, similar to permitting an arsonist to buy fire insurance on his neighbors house.

Synthetic CDOs in effect were collections of insurance policies that were not backed by insurable interest, and were instead designed and contrived to duplicate losses for the benefit of those who held the CDS protection.

I estimate the multiplier effect at 7X, just like the ratio of the tip of the iceberg to what lies underwater. And mortgage fraud is the iceberg that will sink the Titanic. In point of fact the US economy is listing badly and may still be shipping water.

Futile Fulminations – the American character has become corrupt. The moral backbone of the country has turned to jelly. Anything goes, there is no more right or wrong, the dollar is the only measure of success in life.

Indeed, the meaning of any man’s life lies in his accumulated wealth. Here is a success story: “A man was born. He lied, cheated and stole until he accumulated a fortune. After he died, others enjoyed the fruits of all that he had done. The end.” Here is a story of failure: “A man was born. He didn’t have enough street smarts and the fruits of all his labor were enjoyed by those who lied to him, stole from him, and cheated him. He died in poverty. The end.”

A society that is not built on a foundation of mutual trust has no cohesion: when the ship sinks, it’s every rat for himself.

Pragmatic solutions – Unless we wish to continue to outdo Nigeria as the home of fraudulent enterprise, laws will need to be passed and enforced.

The normal lying that goes with commerce in residential real estate – exaggerating your income so you can buy a bigger house, mis-stating intended occupancy so you can control a house long enough to flip it, filling out the application with answers the applicant would not have given if asked, inflating an appraisal so the transaction can go through, holding your nose while you package the stuff into a bogus bond – will have to be punished by jail time.

It would do something for the economy: those who are jailed can’t hold jobs, making employment available for those who are unconfined and unemployed. Some could become teachers, instructing the public in the consequences of formerly acceptable but now illegal behaviors. Of course, many prisons would need to be constructed. Perhaps they could be designed for dual functionality, the buildings could be used for educational institutions to promote the acquisition of marketable skills in a new world. And prison personnel would be in high demand. Supervising a bunch of white collar criminals would not be anywhere near as dangerous as regular prison work.

Best of all, when mortgage fraud is contained, the multiplier effect will stop destroying wealth.

Previous post "Morgicide" - The Illegal Destruction of Mortgages by Securitization