HAMP: About Two-Thirds of Eligible Trial Mods Declined for Permanent 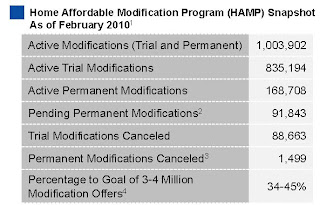 Over 168,000 modifications are now permanent. 88,663 trial modificatons have been cancelled (and another 1,499 permanent mods cancelled).

Here is the report. See here for a list of reports.

Lets see: there were 553,051 cumulative HAMP trial modifications in September. There are 168,708 permanent mods – and about 90,000 cancelled. What happened to the 300 thousand or so other trial mods? Sure another 91,800 have been “approved” for a permanent modification, but that still leaves a huge number missing.

There is a note in the report that says “32% of trials started at least three month ago have been approved for converstion to permanent”. But what about the over two-thirds? 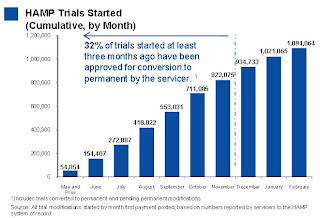 Notice that the pace of new trial modifications has slowed sharply from over 150,000 in Septmenber to just over 70,000 in February 2010. This is slowest pace since May 2009 and is probably because of two factors: 1) servicers are now pre-qualifying borrowers, and 2) servicers are running out of eligible borrowers.