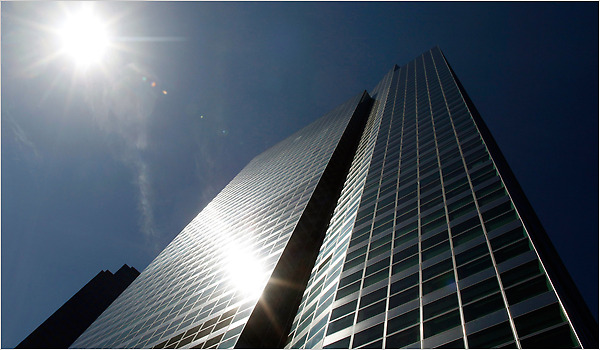 By LOUISE STORY and GRETCHEN MORGENSON

The move marks the first time that regulators have taken action against a Wall Street deal that helped investors capitalize on the collapse of the housing market. Goldman itself profited by betting against the very mortgage investments that it sold to its customers.

The suit also named Fabrice Tourre, a vice president at Goldman who helped create and sell the investment.

The instrument in the S.E.C. case, called Abacus 2007-AC1, was one of 25 deals that Goldman created so the bank and select clients could bet against the housing market. Those deals, which were the subject of an article in The New York Times in December, initially protected Goldman from losses when the mortgage market disintegrated and later yielded profits for the bank.

As the Abacus deals plunged in value, Goldman and certain hedge funds made money on their negative bets, while the Goldman clients who bought the $10.9 billion in investments lost billions of dollars.

According to the complaint, Goldman created Abacus 2007-AC1 in February 2007, at the request of John A. Paulson, a prominent hedge fund manager who earned an estimated $3.7 billion in 2007 by correctly wagering that the housing bubble would burst.

Goldman let Mr. Paulson select mortgage bonds that he wanted to bet against — the ones he believed were most likely to lose value — and packaged those bonds into Abacus 2007-AC1, according to the S.E.C. complaint. Goldman then sold the Abacus deal to investors like foreign banks, pension funds, insurance companies and other hedge funds.

But the deck was stacked against the Abacus investors, the complaint contends, because the investment was filled with bonds chosen by Mr. Paulson as likely to default. Goldman told investors in Abacus marketing materials reviewed by The Times that the bonds would be chosen by an independent manager.

Mr. Paulson is not being named in the lawsuit.

In recent months, Goldman has repeatedly defended its actions in the mortgage market, including its own bets against it. In a letter published last week in Goldman’s annual report, the bank rebutted criticism that it had created, and sold to its clients, mortgage-linked securities that it had little confidence in.

“We certainly did not know the future of the residential housing market in the first half of 2007 anymore than we can predict the future of markets today,” Goldman wrote. “We also did not know whether the value of the instruments we sold would increase or decrease.”

The letter continued: “Although Goldman Sachs held various positions in residential mortgage-related products in 2007, our short positions were not a ‘bet against our clients.’ ” Instead, the trades were used to hedge other trading positions, the bank said.

In a statement provided in December to The Times as it prepared the article on the Abacus deals, Goldman said that it had sold the instruments to sophisticated investors and that these securities “were popular with many investors prior to the financial crisis because they gave investors the ability to work with banks to design tailored securities which met their particular criteria, whether it be ratings, leverage or other aspects of the transaction.”

Goldman was one of many Wall Street firms that created complex mortgage securities — known as synthetic collateralized debt obligations — as the housing wave was cresting. At the time, traders like Mr. Paulson, as well as those within Goldman, were looking for ways to short the overheated market.

Such investments consisted of insurance-like policies written on mortgage bonds. If the mortgage market held up and those bonds did well, investors who bought Abacus notes would have made money from the insurance premiums paid by investors like Mr. Paulson, who were negative on housing and had bought insurance on mortgage bonds. Instead, defaults spread and the bonds plunged, generating billion of dollars in losses for Abacus investors and billions in profits for Mr. Paulson.

For months, S.E.C. officials have been examining mortgage bundles like Abacus that were created across Wall Street. The commission has been interviewing people who structured Goldman mortgage deals about Abacus and other, similar instruments. The S.E.C. advised Goldman that it was likely to face a civil suit in the matter, sending the bank what is known as a Wells notice.

Mr. Tourre was one of Goldman’s top workers running the Abacus deal, peddling the investment to investors across Europe. Raised in France, Mr. Tourre moved to the United States in 2000 to earn his master’s in operations at Stanford. The next year, he began working at Goldman, according to his profile in LinkedIn.

He rose to prominence working on the Abacus deals under a trader named Jonathan M. Egol. Now a managing director at Goldman, Mr. Egol is not being named in the S.E.C. suit.

Goldman structured the Abacus deals with a sharp eye on the credit ratings assigned to the mortgage bonds associated with the instrument, the S.E.C. said. In the Abacus deal in the S.E.C. complaint, Mr. Paulson pinpointed those mortgage bonds that he believed carried higher ratings than the underlying loans deserved. Goldman placed insurance on those bonds — called credit-default swaps — inside Abacus, allowing Mr. Paulson to short them while clients on the other side of the trade wagered that they would not fail.