CoreLogic reported today that more than 11.2 million, or 24 percent, of all residential properties with mortgages, were in negative equity at the end of the f irst quarter of 2010, down slightly from 11.3 million and 24 percent from the fourth quarter of 2009. An additional 2.3 million borrowers had less than five percent equity. Together, negative equity and near-negative equity mortgages accounted for over 28 percent of all residential properties with a mortgage nationwide. 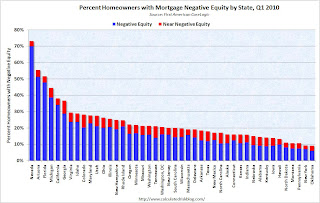 Click on image for larger graph in new window.

Next post Screw You Freddie!!! Freddie Mac Shames Strategic Defaulters, tells them: For shame, don’t do it!