I wonder how that is going to affect the portfolio of Palm Beach County, and all other counties and states for that matter???

The regulator for Fannie Mae and Freddie Mac ordered the two government-sponsored mortgage purchasers to delist their shares from the New York Stock Exchange, in another blow to the one-time giants. 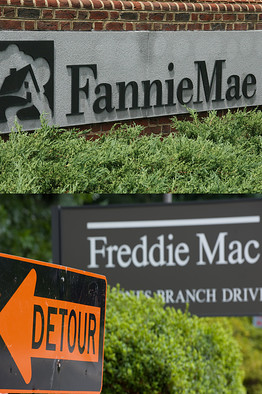 The U.S. government has ordered mortgage giants Fannie Mae and Freddie Mac to delist from the stock market, a federal agency said.

Fannie and Freddie continue to struggle with billions of dollars in losses from tumbling housing prices as well as uncertainty about their future. The government seized them in September 2008 and has yet to spell out a long-term plan for their role in the housing market.

After the delisting, the stocks of the two companies will be traded in the over-the-counter market.

The Federal Housing Finance Agency, the companies’ conservator, said it directed them to delist their stock amid continuing struggles to meet stock-exchange requirements for maintaining price levels.

“FHFA’s determination to direct each company to delist does not constitute any reflection on either enterprise’s current performance or future direction, nor does delisting imply any other findings or determination on the part of FHFA as regulator or conservator,” said Acting Director Edward J. DeMarco.

Stock in the companies dropped following news of the delistings, with Fannie shares down 45% to 50 cents in midday trade and Freddie off 48% at 64 cents.

Fannie shares closed at 92 cents on Tuesday, below the $1 share-price threshold maintained by NYSE Euronext for listings on the Big Board. Shares of Freddie closed at $1.22 on Tuesday. The stock of Fannie is down 22% so far this year, and Freddie shares are down 17%.

Both companies have slipped below NYSE listing standards in the past, but corrected the issues in the fall of 2009, according to an exchange official.

Freddie said it expects the delisting of its common stock and the 20 listed classes of its preferred stock from the NYSE will happen on or about July 8. Fannie will delist from the NYSE and the Chicago Stock Exchange.

Mr. DeMarco said it “simply makes sense” for Freddie to delist because it “fits with the goal of a conservatorship to preserve and conserve assets.”

The two mortgage giants have struggled heavily amid the collapse of the housing boom. Fannie in May said its first-quarter loss narrowed on fewer write-downs and credit-loss provisions as it requested another $8.5 billion in aid from the federal government. Freddie posted a narrower first-quarter loss but said it would need a $10.6 billion injection from the Treasury—its first request for aid in four quarters.


View this document on Scribd