NY Times | A Reservist in a New War, Against Foreclosure 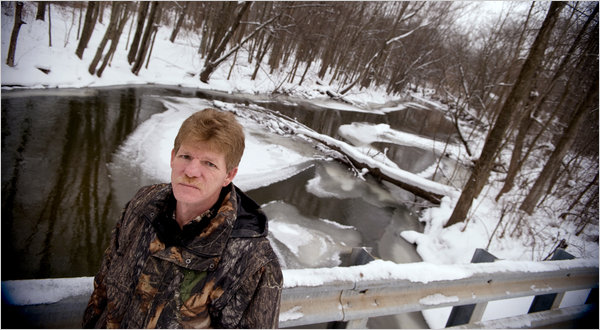 Sgt. James B. Hurley on a bridge near the property he lost to foreclosure while serving with the National Guard in Iraq.

While Sgt. James B. Hurley was away at war, he lost a heartbreaking battle at home.

In violation of a law intended to protect active military personnel from creditors, agents of Deutsche Bank foreclosed on his small Michigan house, forcing Sergeant Hurley’s wife, Brandie, and her two young children to move out and find shelter elsewhere.

When the sergeant returned in December 2005, he drove past the densely wooded riverfront property outside Hartford, Mich. The peaceful little home was still there — winter birds still darted over the gazebo he had built near the water’s edge — but it almost certainly would never be his again. Less than two months before his return from the war, the bank’s agents sold the property to a buyer in Chicago for $76,000.

Since then, Sergeant Hurley has been on an odyssey through the legal system, with little hope of a happy ending — indeed, the foreclosure that cost him his home may also cost him his marriage. “Brandie took this very badly,” said Sergeant Hurley, 45, a plainspoken man who was disabled in Iraq and is now unemployed. “We’re trying to piece it together.”

In March 2009, a federal judge ruled that the bank’s foreclosure in 2004 violated federal law but the battle did not end there for Sergeant Hurley.

Next post Dexia Holdings v Countrywide: The Scope of the Fraud on the People, on the US Congress, and on the International Community May Begin to Unfold

Previous post Daily Finance | Did Bear Stearns Know Its Mortgage Securities Were a House of Cards?