In an attempt to “cover-up” the insidious and outrageous bonuses they had planned to award themselves, a Fannie Mae insider was told to leak word that a “goodwill announcement” (press release) is imminent. This Holiday Goodwill is purported to be a two week (Dec 19th – Jan 2nd) “temporary suspension” of scheduled foreclosure evictions. It’s intended to show the companies compassion, for homeowners, during the 2011 December Holiday season.   REALLY?…Compassion? Homeowners – expect the below 2011 Holiday Greeting Card. 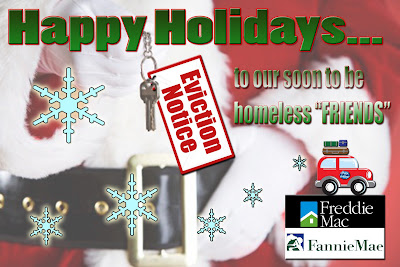 The timing of this hollow & bogus gesture coming from the collapsed and failed Fannie Mae should cause OUTRAGE to all homeowners. It will surely be followed, by a similar announcement, from the other step-child, also in government foster care – Freddie Mac. The planned Holiday Announcement (yet to be made) was originally scheduled to be announced 2 weeks ago and was supposed to give an additional 3-day eviction reprieve and to encompass the Thanksgiving Holiday period of Wednesday Nov. 23rd – Friday Nov. 25th.
I can only imagine the excitement that would have been expressed by many homeowners. Something like…”Wow…your kidding…a whole 3-days…what a life-saver!” 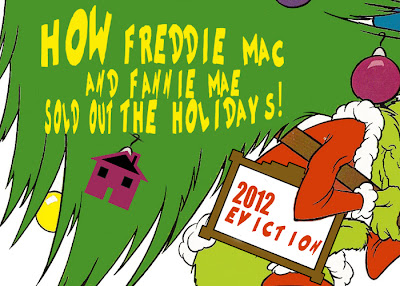 However, after their outrageous pay and bonuses were made public, it was decided to temporarily delay the phony announcement good news about the 3-day Turkey eviction reprieves. Instead the top 2 executives heading the seized housing fiance giants were dragged “up the hill” (to Washington) and forced to explain, to members of a Congressional committee, why they deserved a combined $12 MILLION in salary and bonuses for 2011. Yes, you read it right, theses two axxholes (below) want a mere…. $12 million for 2011.

Previous post Scriveners Error | Letter from The Law Offices of Daniel C. Consuerga to Foreclosure Judge Meenu Sasser "We made a mistake, the trust we are suing on does not exist, can you fix it?"