WASHINGTON, DC – On Thursday September 13th, Mark Roarty, an Ohio leader and nationally recognized blogger and housing advocate traveled to our nation’s capital to meet with top Obama Administration officials at the White House. Mr. Roarty discussed the immediacy and need for implementing bold new solutions to the housing and foreclosure crisis that has devastated our communities. cities & states. 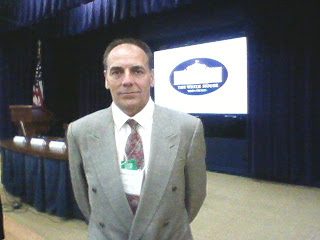 In break-out meetings with officials from HUD, DOJ, and the White House National Economic Council – Mark joined 150 other leaders, clergy, homeowners, and housing advocates (representing 26 states) and laid out recommendations to address the housing crisis and getting our economy back on solid ground. Roarty, along with other leaders, told the White House administration that it is far past time that they enact policy solutions such as:
– Principal reduction as a bold new plan needed to address foreclosures, fix the housing crisis, create jobs, and reset the economy. Specifically, the request included strong language to remove Ed DeMarco, interim director of FHFA, which oversees Fannie Mae and Freddie Mac. Ed DeMarco obstinately and ideologically opposes principal reduction, despite its proven benefits for homeowners and taxpayers.
– Publicly support the RMBS Task Force investigating big bank fraud, which the president announced in his State of the Union address back in January. The task force needs additional financial resources and staff to conduct real and effective investigations. The task force work will result in accountability for Wall Street crimes that crashed our economy.
– A nationwide Homeowner Bill of Rights that enacts strong standards for how banks must work with borrowers in foreclosure, including mediation and mandatory principal reduction when it would help the homeowner and investor.

Later in the day, Roarty joined up with other Ohio housing support groups and organizational leaders to visit Ohio Senators Sherrod Brown and Rob Portman. In the Senators’ Washington D.C. offices they met with key staff to share ideas and ask for support from the Ohio Senators on the recently introduced Menendez/Boxer Bill (S. 3522). The bill would allow homeowners trapped in high-interest loans, guaranteed by Fannie Mae and Freddie Mac, to refinance into lower interest loans and also eliminate up-front fees along with appraisal and loan closing costs.

Roarty, was invited to the meeting because of his affiliation with NPA and The New Bottom Line along with his nationally recognized blog Ohio FRAUDclosure. In Ohio, he is a leader and homeowner advocate with the Mahoning Valley Organizing Collaborative (MVOC). Although he was impressed that the administration agreed to host the forum, he feels that more immediate action is needed. 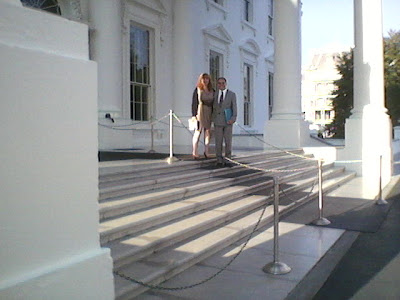 Tracy Van-Slyke (Director of The New Bottom Line) & Mark Roarty on front steps of White House prior to meeting.

Mark Roarty is also one of three nationwide home-owner spokespersons for The New Bottom Line coalition’s Home Is Where The Vote Is campaign. The campaign, with the goal of making President Obama and Governor Romney address the foreclosure and housing crisis, features Roarty in a two-minute video explaining the realities faced by thousands of Ohio homeowners. Some of the deeply felt pain, of being in foreclosure, is shared by Roarty in the video. Recently, after a 4 1/2 year legal battle, a decision was handed down by an Ohio Appellate Court reversing the illegal foreclosure on his home.

More than 400,000 OHIO homeowners have been foreclosed on since 2007, with the state’s eight urban cores being hit hardest. The spike in foreclosures has led to massive neighborhood blight, vacant properties and community disinvestment. Those maintaining their homes have seen a huge decline in value, leaving 529,834 Ohio homeowners underwater on their mortgages. That figure is roughly one quarter of all homeowners in the state. Nationally, there are almost 16 million underwater homes, totaling a loss of $1.2 trillion in home equity. Resetting those mortgages to fair market value would save the average underwater homeowner $543 per month, pumping $104 billion into the national economy every year. This would also allow financial capacity to create 1.5 million jobs nationally.

The foreclosure crisis in Ohio is rooted in illegal activity by lenders and Wall Street and inadequate rules and enforcement. The misconduct included predatory sub-prime lending, targeting of senior citizens, veterans, and communities of color, and bundling and pawning off flawed mortgages, avoiding accountability. Those forces combined with record long-term unemployment to bring our economy to the brink of collapse, and continue to jeopardize our economic recovery.

“The Mahoning Valley (Youngstown), like many areas across the country, need help to stop the on-going and rampant bank and servicing fraud in foreclosure,” Roarty said. “Local and state leaders and organizations have done everything possible to deal with the result of illegal and improper foreclosures (vacant homes & blighted neighborhoods) by helping secure funds for demolition. Now we need to address the cause. We need action, and we need it now. My home, our communities, and our economic future is depending on it.”

Speaking directly to HUD Secretary Shaun Donovan at the end of the meeting, Roarty, in front of the entire forum, asked that the administration officials in attendance pass along the importance of these issues – directly to the President.

Although he was impressed that the administration agreed to host the forum, he feels that more immediate action is needed. “The President needs to address this in his campaign,” Roarty said after the meeting. “It’s great that administration officials heard our concerns and critique, but this requires more than lip service.” 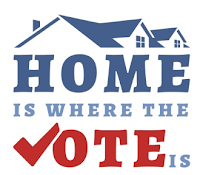