All of our efforts and all of our work on exposing these fraudsters is coming to a head. More and more, almost everyday, there are reports coming from highly respected organizations of what we all have been screaming about for years…

Now is the time to push even harder. Do not let up and keep up the fight… 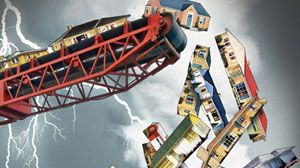 How the federal housing agencies—and some of the biggest bailed-out banks—are helping shady lawyers make millions by pushing families out of their homes.

LATE ONE NIGHT IN February 2009, Ariane Ice sat poring over records on the website of Florida’s Palm Beach County. She’d been at it for weeks, forsaking sleep to sift through thousands of legal documents. She and her husband, Tom, an attorney, ran a boutique foreclosure defense firm called Ice Legal. (Slogan: “Your home is your castle. Defend it.”) Now they were up against one of Florida’s biggest foreclosure law firms: Founded by multimillionaire attorney David J. Stern, it controlled one-fifth of the state’s booming market in foreclosure-related services. Ice had a strong hunch that Stern’s operation was up to something, and that night she found her smoking gun.

It involved something called an “assignment of mortgage,” the document that certifies who owns the property and is thus entitled to foreclose on it. Especially these days, the assignment is key evidence in a foreclosure case: With so many loans having been bought, sold, securitized, and traded, establishing who owns the mortgage is hardly a trivial matter. It frequently requires months of sleuthing in order to untangle the web of banks, brokers, and investors, among others. By law, a firm must execute (complete, sign, and notarize) an assignment before attempting to seize somebody’s home.

A Florida notary’s stamp is valid for four years, and its expiration date is visible on the imprint. But here in front of Ice were dozens of assignments notarized with stamps that hadn’t even existed until months—in some cases nearly a year—after the foreclosures were filed. Which meant Stern’s people were foreclosing first and doing their legal paperwork later. In effect, it also meant they were lying to the court—an act that could get a lawyer disbarred or even prosecuted. “There’s no question that it’s pervasive,” says Tom Ice of the backdated documents—nearly two dozen of which were verified by Mother Jones. “We’ve found tons of them.”

This all might seem like a legal technicality, but it’s not. The faster a foreclosure moves, the more difficult it is for a homeowner to fight it—even if the case was filed in error. In March, upon discovering that Stern’s firm had fudged an assignment of mortgage in another case, a judge in central Florida’s Pasco County dismissed the case with prejudice—an unusually harsh ruling that means it can never again be refiled. “The execution date and notarial date,” she wrote in a blunt ruling, “were fraudulently backdated, in a purposeful, intentional effort to mislead the defendant and this court.”

Stern has made a fortune foreclosing on homeowners. He owns a $15 million mansion, four Ferraris, and a 130-foot yacht.

More often than not in uncontested cases, missing or problematic documents simply go overlooked. In Florida, where foreclosure cases must go before a judge (some states handle them as a bureaucratic matter), dwindling budgets and soaring caseloads have overwhelmed local courts. Last year, the foreclosure dockets of Lee County in southwest Florida became so clogged that the court initiated rapid-fire hearings lasting less than 20 seconds per case—”the rocket docket,” attorneys called it. In Broward County, the epicenter of America’s housing bust, the courthouse recently began holding foreclosure hearings in a hallway, a scene that local attorneys call the “new Broward Zoo.” “The judges are so swamped with this stuff that they just don’t pay attention,” says Margery Golant, a veteran Florida foreclosure defense lawyer. “They just rubber-stamp them.”

But the Ices had uncovered what looked like a pattern, so Tom booked a deposition with Stern’s top deputy, Cheryl Samons, and confronted her with the backdated documents—including two from cases her firm had filed against Ice Legal’s clients. Samons, whose counsel was present, insisted that the filings were just a mistake. She refused to elaborate, so the Ices moved to depose the notaries and other Stern employees whose names were on the evidence. On the eve of those depositions, however, the firm dropped foreclosure proceedings against the Ices’ clients.

It was a bittersweet victory: The Ices had won their cases, but Stern’s practices remained under wraps. “This was done to cover up fraud,” Tom fumes. “It was done precisely so they could try to hit a reset button and keep us from getting the real goods.”

Backdated documents, according to a chorus of foreclosure experts, are typical of the sort of shenanigans practiced by a breed of law firms known as “foreclosure mills.” While far less scrutinized than subprime lenders or Wall Street banks, these firms undermine efforts by government and the mortgage industry to put struggling homeowners back on track at a time of record foreclosures. (There were 2.8 million foreclosures in 2009, and 3.8 million are projected for this year.) The mills think “they can just change things and make it up to get to the end result they want, because there’s no one holding them accountable,” says Prentiss Cox, a foreclosure expert at the University of Minnesota Law School. “We’ve got these people with incentives to go ahead with foreclosures and flood the real estate market.”

View the documents featured in this story:

Stern’s is hardly the only outfit to attract criticism, but his story is a useful window into the multibillion-dollar “default services” industry, which includes both law firms like Stern’s and contract companies that handle paper-pushing tasks for other big foreclosure lawyers. Over the past decade and a half, Stern has built up one of the industry’s most powerful operations—a global machine with offices in Florida, Kentucky, Puerto Rico, and the Philippines—squeezing profits from every step in the foreclosure process. Among his loyal clients, who’ve sent him hundreds of thousands of cases, are some of the nation’s biggest (and, thanks to American taxpayers, most handsomely bailed out) banks—including Wells Fargo, Bank of America, and Citigroup. “A lot of these mills are doing the same kinds of things,” says Linda Fisher, a professor and mortgage-fraud expert at Seton Hall University’s law school. But, she added, “I’ve heard some pretty bad stories about Stern from people in Florida.”

While the mortgage fiasco has so far cost American homeowners an estimated $7 trillion in lost equity, it has made Stern (no relation to NBA commissioner David J. Stern) fabulously rich. His $15 million, 16,000-square-foot mansion occupies a corner lot in a private island community on the Atlantic Intracoastal Waterway. It is featured on a water-taxi tour of the area’s grandest estates, along with the abodes of Jay Leno and billionaire Blockbuster founder Wayne Huizenga, as well as the former residence of Desi Arnaz and Lucille Ball. (Last year, Stern snapped up his next-door neighbor’s property for $8 million and tore down the house to make way for a tennis court.) Docked outside is Misunderstood, Stern’s 130-foot, jet-propelled Mangusta yacht—a $20 million-plus replacement for his previous 108-foot Mangusta. He also owns four Ferraris, four Porsches, two Mercedes-Benzes, and a Bugatti—a high-end Italian brand with models costing north of $1 million a pop.

Despite his immense wealth and ability to affect the lives of ordinary people, Stern operates out of the public eye. His law firm has no website, he is rarely mentioned in the mainstream business press, and neither he nor several of his top employees responded to repeated interview requests for this story. Stern’s personal attorney, Jeffrey Tew, also declined to comment. But scores of interviews and thousands of pages of legal and financial filings, internal emails, and other documents obtained by Mother Jones provided insight into his operation. So did eight of Stern’s former employees—attorneys, paralegals, and other staffers who agreed to talk on condition of anonymity. (Most still work in related fields and fear that speaking publicly about their ex-boss could harm their careers.)

Be sure to continue reading on…

Next Page: One paralegal said Stern grabbed female employees from behind and faked sex with them. Former employees describe him as a “pig.”

Andy Kroll is a reporter at Mother Jones. For more of his stories, click here. Email him with tips and insights at akroll (at) motherjones (dot) com. Follow him on Twitter here.